Two Kampala Capital City Authority (KCCA) law enforcement officers have been admitted in hospital one in critical condition and another in serious condition after they were stabbed by hawkers in Kisenyi, Lubaga Kampala.

According to KMP Police Spokesperson, Patrick Onyango, the two law enforcement officers only identified as Mutebi and Lubega are currently admitted at Novik Hospital on Bombo Road following an attack from hawkers.

According to Onyango, Mutebi is in Intensive Care Unit while Lubega is in a stable condition.

Onyango says, the victims together with their supervisor Isaac Egesa Obuli, a law enforcement officer/ Administrator at New Taxi Park were returning from resolving a dispute between taxi operators on Masaka and Ssembabule stages when they were attacked by a hawker and his colleague.

In the scuffle that ensued, the officers found out that Mutebi had been stabbed and was on the ground as the suspect, Juma Akankwasa was holding a blood stained knife.

In the process, Onyango says law enforcers used reasonable force to subdue Juma Akamkwas and disarmed him.
Another hawker Charles Nsereko wrestled officers in an attempt to block the arrest of Akankwasa though he was too overpowered and arrested.

The two hawkers were arrested on offence of attempted murder and are detained at Central Police Station Kampala while the victims are currently admitted at Novik Hospital on Bombo Road.

Mr Egesa with his subordinates in company of the two wrangling groups went for a fact-finding mission on the ground where the difference were resolved amicably. As they were returning from the field, they heard one of the law enforcement officers behind crying for help.

Statements have been recorded from witnesses, blood stained knives was recovered from the scene and have been exhibited.

Police says, the hawkers, Juma Akankwasa and Charles Nsereko, have been slapped with charges of attempted murder as investigations commence to prosecute the two.

Onyango said deployment in the New Park and on the streets has been increased to deal with anyone with intention to take the law in their hands and also ensure that such acts doesn’t happen again. 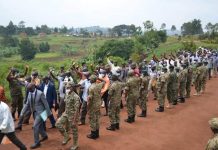 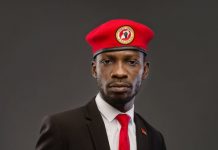