A team of Joint Security Forces arrested criminal racket and recovered 11 stolen motorcycles and several number plates in an operation conducted in North Kyoga, to rid the boda boda industry, of acts of violence, impunity and lawlessness by such criminal elements.

An intelligence led operation was mounted by security agencies Districts of Lira, Kwania and Apac and cracked down an organized criminal gang, that had specialized in the theft of bodaboda motorcycles all over the country.

According to the police spokesperson Fred Enanga, the gang had agents and collaborators in almost every part of the country, who would identify newly bought motorcycles and plan for its robbery. The stolen motorcycles are sold in South Sudan, DRC and Kenya.

The task team started its operations with the arrest of Okori Mondri, a 28-year-old, bodaboda rider of Adagaya cell, Abedi ward, Apac T/C, Apac district. Mondri was tracked down and arrested from Inomo sub-county in Kwania district, while in possession of a suspected stolen motorcycle under registration number UEU 548Q, Bajaj Boxer, red in colour.

At the time of his arrest, police says Mondri had just returned from Soroti district. His arrest led to the recovery of 10 more suspected stolen motorcycles, 5 of which were recovered from his premise and an additional 5, from his accomplices in the districts of Kwania and Apac respectively.

He said a serious manhunt for two ring leaders of the gang is ongoing including; Okidi, Denis who is the gang leader in N/Kyoga region and Akaki Sam both residents of Apar village is the over all commander of the gang in East Kyoga, Sipi and Elgon region. “We have also interested ourselves on a racket that has been helping them forge log books and also other chassis and engine number, from Lira city” Enanga said.

Enanga said all the engine numbers, chassis number and recovered number plates have been submitted to the URA for verification and details of ownership. 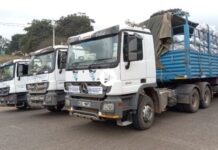 Avoid those ministers who traveled to Dubai -Museveni warns Ugandans