Rwandan president Paul Kagame has fired his minister of State for Youth and Culture Mr Eduoard Bamporiki over “matters of accountability.”

In a statement issued by the Office of the Prime Minister today, Kagame invoked a Constitutional provision that gives him absolute power to appoint and dismiss any member of cabinet.

“Today the 5th May 2022, His Exellency the President has suspended Mr Bamporiki Eduoard from his duties as minister of state in the ministry of Youth and Culture owing to matters of accountability under investigation” Prime Minister Eduoard Ngirente said.

According to article 116 of Rwanda’s Constitution, cabinet ministers are selected, appointed and dismissed by the president of the republic.

The Prime Minister, however, did not specify details relating to charges levelled against Bamporiki or the issues of improprierity he is suspected to be involved in.

Local media also carried unconfirmed reports that Bamporiki has already been arrested over the same charges.

Bamporiki who holds a bachelor’s degree in Law from the Université Libre de Kigali was appointed States Minister by President Kagame in the Ministry of Youth and Culture in 2019 and he has been in office until today. 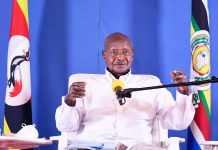