The Leader of Opposition in Parliament (LOP) Mathias Mpuuga, has attacked the Internal Affairs minister Maj Gen Kahinda Otafiire over the statement he made, attributing the Bijambiya killings in Greater Masaka to the region’s rejection of the NRM candidates in the previous elections.

Speaking at the funeral of Canon Mary Nabunya Senyonjo, the late wife to Bishop Christopher Senyonjo, the former Bishop of West Buganda Diocese, Mpuuga said demanded that Otafiire’s statement can be taken to mean that the government is punishing the people of Masaka for the choices they made during this year’s general elections.

“I find the statements of the minister’s statements very disturbing. First of all, he is not only blaming victims, he is also insisting that instead some other person should take charge of security of that region other than the regime in which he is a minister.” Hon Mpuuga said.

Mpuuga says the general’s statements are irresponsible and imply that there is insecurity in the sub-region because someone else is politically in charge of Greater Masaka sub-region other than the ruling party -National Resistance Movement.

This, Mpuuga says, is an admission of knowledge of who is behind the killings.

“If he was part of a very responsible government, today he should have been resigned or forced to resign. We take exception to them and demand of him to explain why he believes that by voting the opposition, the people of Masaka deserve death… For the man of his age, I don’t want to believe that probably he is senile and therefore unable to decipher his responsibility as a minister in the regime” Mpuuga fumed.

The Leader of opposition said the minister’s statements prove that the reluctancy to provide security to the people of Masaka was indeed deliberate, and he is going to rally leaders from the region to come up with a decision on how to protect their people.

“For general Otafiire and his government, you certainly know who is killing our people but you believe we deserve the punishment. But I can tell you, whether you kill everybody in Masaka, the next generation in Masaka will believe as we do thats our DNA and we shall continue to reject you” he added.

Eulogising the deceased, Mpuuga hailed Canon Mary Senyonjo for her dedicated service to the Church, specifically West Buganda Diocese where her husband, the Rt Rev Christopher Senyonjo served as Bishop for 24 years.

She died on September 5, 2021 at the age of 81 of kidney failure. She is survived by a husband, seven children and 15 grandchildren. 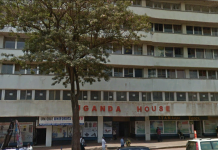 A new faction emerge in UPC; say they want to see...