Uganda’s president Yoweri Museveni has said he is awed by the comfort and safety he experienced on a flight on the country’s airline during his trip to the neighboring Tanzania on Thursday.

After his maiden flight on the airline since the national carrier was revived almost two years ago, Museveni described his experience aboard Uganda Airlines Bombardier CRJ900 as “a wonderful one” and the pilots as professionals who know their work.

Museveni jokingly said when the aircraft landed at the airport, he did not know due to the smooth landing; thanks to the experienced cabin crew.

“I had not flown using the @UG_Airlines, until yesterday. The crew is very good. When they were landing, I did not know we had landed” President Museveni tweeted on Friday.

Museveni traveled to Dar es Salaam, Tanzania for the signing of the Host Government Agreement (HGA) -the agreement establishes the legal and commercial framework for the construction and operation of the oil pipeline to ship crude from fields in western Uganda to international markets.

“I arrived in Dar es Salaam, Tanzania aboard our own Uganda ‘Crane’ for the EACOP project ceremonies. I continue to call upon all travelers especially fellow Ugandans to support the @UG_Airlines” he added.

Regarding the alleged corruption in the national airline, Museveni said some elements in management and the board MUST face the consequences.

Museveni applauded H.E Samia Suluhu Hassan, the President of the United Republic of Tanzania for the invitation to witness the signing of the Agreement which he described as a great step towards the pipeline project which will benefit the entire Great Lakes Region. The pipeline will proceed to the port of Tanga in Tanzania.

The Ugandan president referred to the ceremony that will kickstart the construction of a $3.5 billion crude pipeline as historic.

“I am very happy to see this. Mwalimu Nyerere, wherever he is must be very happy because this is what we were talking about all the time. This pipeline is a very important regional infrastructure project” He stated.

He however cautioned East Africans not to get carried away by oil prospects since petroleum is an exhaustible resource but focus on agriculture, tourism, ICT, services, and Industries which are continuous.

“We are going to use the oil resources to build durable sectors and by the time the oil gets finished, we shall have reached somewhere” Museveni noted. 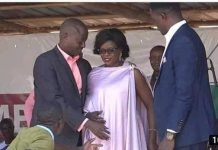