For those who still had doubts about singer Joseph Mayanja alias Jose Chameleone’s allegiance to People Power, the moment of truth has finally come.

The 2021 Kampala Lord Mayor hopeful crashed all the hopes for Democratic Party faithfuls when he openly picked his nomination forms to run for the mayoral as an independent candidate under People Power come the 2021 general elections.

While picking the forms at the People Power headquarters, Jose Chameleone lauded Hon. Robert Kyagulanyi Ssentamu alias Bobi Wine for inspiring him to join the struggle when he visited him at Nsambya hospital after the Arua saga.

Chameleone went ahead to reveal how Bobi Wine instilled confidence in him to liberate the nation. When he thought about Bobi’s words, Chameleone found them very inspiring and eventually followed the advice.

“DP is in my heart but People Power is in my blood” Jose chanted.

The singer furthermore vowed how he is not ready to disappoint the People Power movement as he is looking forward to delivering a developed city and country if voted in power.

Initially, Chameleone was initially an NRM Supporter until July, 2019 when he officially subscribed to DP (Democratic Party).

However as of today the “Baliwa” hit maker is People Power and one may be right to say his abrupt changes in political sides only Justify the “Chameleone” he is by changing colors depending on the situation. 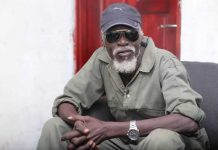