Retired Lt. Gen. Henry Tumukunde has said he is preparing a press statement to be issued in two day’s time in which he intends to inform the nation about his ordeal in Luzira prison.

The statement he says outlines human rights violations in Luzira prison, and it will highlight the delays in the court system as witnessed by himself.

Gen. Tumukunde is out on bail following his release on 11th May, after spending close to two months in Luzira prison where he was held on remand on charges of treason.

A fresh-looking Tumukunde in company of his Lawyers led by Anthony Wameli, had today appeared before City Hall court Grade One Magistrate Valerian Tuhimbise for mention of his case and to know the progress of investigations.

The High Court in Kampala granted bail to Gen. Tumukunde and today he appeared in honor of his bail conditions. Tumukunde is also facing charges of unlawful possession of firearms and ammunitions.

Gen. Tumukunde’s Lawyers Anthony Wameli and Geoffrey Turyamusiima asked court to give the State the last adjournment to conclude its investigations, but State Attorney Kyomuhendo said the state is constrained by the prevailing conditions of the COVID-19 lockdown which restricts movement.

Magistrate Tuhimbise then concurred with the State adding that the Chief Justice also issued guidelines which suspend hearing of cases except for bail applications.

Insiders however told this website that Gen. Tumukunde is also going to use the opportunity to communicate his campaign program as well as plans for 2021 general elections in which he is set to run as president.

Reply, Reply All or Forward 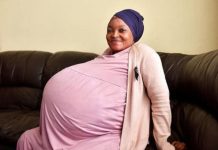