Uganda’s president, Yoweri Museveni said he is not quitting politics as long as the struggle for unification of Africa is not complete.

Museveni said the National Resistance Movement’s (NRM) longstanding program to modernize Africa through Pan-Africanism and integration is not yet complete and as long as he is voted into power, he will hang on.

President Museveni (75), made the remarks in response to a question about his longevity in power and the age factor during a recent interview with NBS TV’s Canary Mugume.

Museveni said he was lured into politics by the deficiency of visionary political leadership in Uganda, and pursuance of the principles of NRM has pushed him to hang on.

“I have never looked for a job. I am not short of a job and that job has always been there; my cows. In my family we have never had a muluka chief, but we had to come in to the politics because political leaders had failed” Museveni said.

Museveni said, until NRM’s program of pursuing principles of Patriotism, Pan-Africanism and Social-Economic transformation is complete through East African integration and prosperity, he may be not soon quitting.

He challenged East Africans to reminisce on the achievements the region would have registered in the fight against coronavirus if all 6 EAC states were united.

“If the program is not yet finished, why are you worried about us who are struggling to see the program finished?” He asked.

Asked when the struggle will end, Museveni said he doesn’t know when, but since the process of East African integration has reached to a level of a confederation, there is evidence that the struggle is progressing.
He advised Ugandans to look at the country’s future program, other than looking at the contributors to the struggle.

“For me I have no problem. I have my job; it has been there. But if the people of Uganda agree, I would not like to desert the struggle when a historic task is not achieved” Museveni said.

Museveni said he has lived a purpose-led life to awaken people to modernization and that’s the reason he has managed to stay physically fit at his age. He also confirmed that he will be standing as president cone 2021.

He said NRM’s succession plan is in the constitution and being a party of unity, there are leaders to steer the NRM program ahead after he retires. 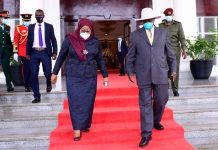 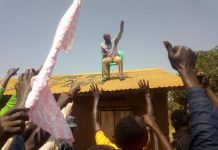