Ugandan Singer Edirisah Musuuza a.k.a Eddy Kenzo has rubbished all reports claiming that he tested positive for the corona virus disease on Sunday night.

Kenzo is in hospital in the Cote d’Ivore where he found himself stuck after Uganda closed its boarders and stopped all passenger flights in and out of the country as ameasure to stop the spread of COVID-19.

Kenzo has shared a photo of himself on a hospital bed and a caption through which he revealed he is not sick of COVID-19 as earlier reported. Kenzo revealed that he had talked with blogger Ashburg Kato earlier on about him being in hospital but it was not because of Corona Virus but rather ulcers which were brought about by the change in diet and the oily foods in the Country Capital Abidjan.

Yesterday, a renown blogger Ashburg Kato went to his Facebook page and reported how the Bigtalent singer had checked himself into hospital where he tested positive with Corona Virus.

The news spread like wildfire and got most of the singer’s fans and followers worried. Most of them ran to their various social media platforms to send out the message whilst urging the Uganda Government to arise to the occasion and help their celebrity.

The singer expressed his disappointment in the blogger who twisted the information and instead reported that he had tested positive for the virus that has got the whole world on its feet.

To advertise on this website or send a story for publication, contact 0701609906 or send mail at [email protected] 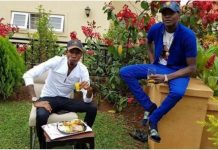