The territorial Police at Wakiso said they are investigating a murder by shooting of Uganda Broadcasting Co-operation (UBC) Robert Kagolo, that took place at Bugembejembe village in Wakiso, on 29.04.2021 at around 8pm.

In a statement issued today, it is alleged that Robert Kagolo was shot by a Local Defence Unit (LDU) personnel following a disagreement after he knocked the gate of his late brother’s home with a motor vehicle.

Deputy spokesperson for Kampala Metropolitan Police, Luke Owoyesigire, said upon return from the village after the brothers burial, Kagolo made an attempt to hurriedly enter the home after he suspected that some people were following him.

According to police, a disagreement ensued between him and two LDU personnel who were guarding the home, leading to a shooting of which the circumstances are being investigated. Kagolo was later rushed to ST Joseph Hospital Waskiso where he succumbed to the injuries sustained.

Upon getting the information, Owoyesigire said a joint team of Police and LDU command responded to the scene and managed to arrest the killer and his colleague.

The shooter has been identified as Mamuli Rashid.

Kagolo’s body is yet to be conveyed to city mortuary Mulago for Postmortem as further investigations into the matter are ongoing. However, a tentative burial program indicates that there will be public viwing of the body today at UBC at Mid-day ans thereafter a mass will be held at St Stephen Church Nansana followed by a vigil at his home in Nansana Wamala.

Burial will be on Saturday 1st May 2021, noon at Namabeya Gomba. 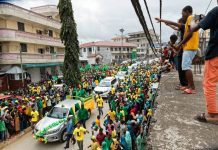 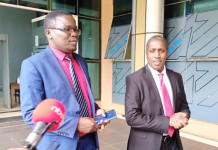