Jailed former Principal Accountant in the Office of the Prime minister, (OPM) Geoffrey Kazinda, has given up on further participation in the pending charges against him before court, citing humanitarian grounds.

Kazinda informed Anti-corruption Court Judge, Margret Tibulya that he is also human, who deserves to be shown kindness due the chain of trials that have weighed him down for the last last 8 years.

IGG’s Sarah Birungi informed court that the Constitutional Court did not halt the charge of illicit enrichment from proceeding against Kazinda, but that if his concern is fatigue, he can be given a timeline within which to have enough rest and resume later because he is the one delaying this particular case with his defense.

Today, Kazinda implored Justice Tibulya to proceed without him, and not to call him again from prison where he is incarcerated, to attend court.

The case in question has taken two years since 2018 when court ruled that Kazinda a case of illicit enrichment to answer.

The IGG alleges that between 2010 and June 2012, Kazinda maintained a standard of living above that which was commensurate with his income or beyond known sources of his income or assets.

In her ruling, Justice Tibulya ordered the Anti-corruption Court Registrar, Susan Kanyange, to find Kazinda a Government Lawyer to defend him in the pending case to its logical conclusion because; legally, Kazinda is supposed to be represented.

In a related development, DPP Jane Frances Abodo has complied with the Constitutional Court ruling and dropped 73 Corruption related charges against Kazinda for his role in the misappropriation of PRDP funds.

Justice Tibulya went on to discharge Kazinda on these very charges that where also before her court.

However, despite the dropped charges, Kazinda cannot leave Luzira prison due the pending trial on illicit enrichment charges that has been adjourned to this Friday 14th/August/2020. 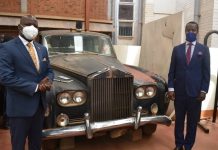