At least five people were killed Tuesday in the central African country of Chad during protests demanding the country’s transitional military government transfer power to civilians.

Voice of America (VOA) reported that a man was fatally shot in the southern city of Moundou and another was killed in N’Djamena.

The capital N’Djamena saw hundreds of protesters being dispersed by security forces using tear gas. Unverified posts on social media show that live ammunition had been used in certain places. Protesters burned tyres in several neighborhoods, and a witness said firefighters struggled to contain a blaze that was large enough to be seen from far away.

The protests follow a contested transition process following the death of President Idriss Deby Itno, who was killed on April 19 while visiting troops fighting rebels north of the capital, N’Djamena. The military immediately appointed Deby’s 37-year-old son, Mahamat Idriss Deby, as head of the council, drawing immediate criticism from political opponents and rebel forces accused of assassinating his father.

However, a local NGO reported nine fatalities – seven in the capital and two in the south. The Chadian Convention for the Defence of Human Rights said 36 people were also wounded and about 12 arrested.

“We denounce and condemn this massacre … (and) the disproportionate use of weapons of war against protesters,” it said.

After the violent protests on Tuesday, Mahamat Deby promised an “inclusive national dialogue” and also pledged to “fight terrorism and respect all its international obligations”.

A spokesman for the council said security forces were attempting to contain the protesters while limiting material damage.

Reports indicate that tensions escalated in the impoverished desert country after the sudden death of Deby, who ruled the country for three decades. A coalition opposed to the military government called for protests, despite a government ban on them.

Authorities arrested several protesters and journalists, as protesters vandalized a gas station and burned tires throughout N’Djamena. Police fired tear gas on protesters in the capital, while other demonstrations were underway in other parts of the country.

After meeting in Paris Tuesday, French President Emmanuel Macron and Democratic Republic of the Congo President Felix Tshisekedi condemned “the crackdown on protests” in a joint statement that also called for an end to the violence.

The two leaders voiced support for a transition process that is “open to all Chadian political forces, led by a civilian government,” with the intent to organize elections within 18 months.

The military announced Deby’s death on April 20, just hours after he was confirmed the winner of the presidential election held earlier in the month.

On Sunday, the rebels known as the Front for Change and Concord in Chad (FACT) accused by the military of killing ruler Idriss Deby Itno, said they are ready to “observe a ceasefire,” but Chad’s new ruling junta, however, refused to negotiate.

“The time is not for mediation, nor for negotiation with outlaws,” Azem Bermandoa Agouna, spokesman of the military council, said in a statement.

A day earlier, the military said it bombarded the rebels “to the verge of despair” to stop their advancement on the city. 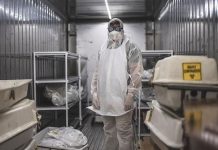