Senior Presidential advisor on media Joseph Tamale Mirundi, has said security officers who were in charge of a botched operation to block Kyadondo East MP Hon. Robert Sentamu Kyagulanyi from accessing the city center on Independence day, must be sacked with disgrace.

On October 9th, Kyagulanyi managed to beat security surveillance, heavy deployment and barricades around his home in Magere, Wakiso District, escaped house arrest and later surfaced in the city center.

Bobi escaped in a boda-boda daring stunt but he was cut off by security as he approached downtown Kampala en-route to Busabala, the venue of his cancelled concert. He, however, managed to again escape arrest according to social media recordings posted online.

The former Press Secretary for President Museveni says it was a huge embarrassment for security organs in the country to deploy and spend the whole night guarding Bobi’s home, only to see him the next day ‘jabbing’ with his supporters on the streets of Kampala.

Mirundi says Bobi exposed lapses in the country’s security, and in other countries such situations are followed by massive dismissals to avoid future embarrassment, because such security lapses can result into catastrophic consequences.

“It’s an embarrassment to security.. and in other countries if such lapses occur, in security organs heads must roll! the president should sack all of them” Mirundi said.

Mirundi says government and security organs should also understand that opposition politicians want to share the limelight on important events especially when the country is hosting important visitors. He said the opposition and more especially Bobi Wine scored because he (Bobi) dominated airwaves and broadcasts on the eve, and ‘d’ day of independence. 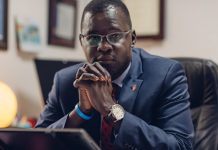 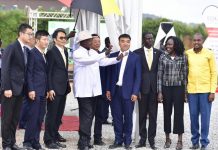