Uganda’s president Yoweri Museveni has implored residents of Luwero district who suffered the brunt of the 1981-1986 bush war that brought him into power 36 years ago, to renew their relationship with his NRM government despite years of slow development.

President Museveni who was speaking at a religious crusade convened by his daugther in the district, attributed the under-development in the area to appointed leaders who let him down, but also blamed elected leaders who he said have not been so helpful.

“Let us start our relationship between government and the people of Luwero afresh. We sent some leaders who didnt help much but you also elected leaders who were not so helpfu. Lets start afresh” Museveni said.

Often-times regarded as NRM’s political Mecca, there has been growing levels of resentment among the residents who previously identified themselves with Museveni and NRM party after hosting the Bush War ‘liberators’ for more than four years during the bush war.

This resentment over failed government programmes and over 30-year unfulfilled presidential pledges, saw the NRM party fail to have a single Member of Parliament candidate win a constituency in Luwero district in 2021 election, and President Museveni getting a dismal 27% vote in the area.

At the event dubbed “Light up Luwero for Jesus Mission Crusade” organized by Pr. Patience Rwabwogo of Covenant Nations Church, Museveni who was accompanied by his wife Janet, said he “returns (to Luwero) in Peace” and asks for a fresh start.

Amid prayers and bible teachings, Museveni appealed to locals to embrace government programmes -the Parish Development Model (PDM) in particular, but also made a call to believers in Christian faith not to just pray hoping for miracles but to also work hard.

“I call upon all of you to work hard especiall you Christians. Dont sit and pray for miracle wealth. Work so that you represent God better…” he said.

While Luweero boasts of more than 1,500kms of the road network that connect through the different sub-counties, 70 per cent of the roads infrastructure is in a sorry state. At the time of campaigns, the Opposition politicians capitalised on the poor state of the infrastructure to promise good roads.

The area also has challenges of access to affordable health care services, and rampant land evictions charcterized with land grabbing perpetuated by poweful individuals in government. 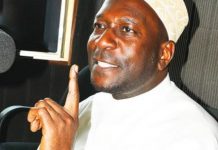 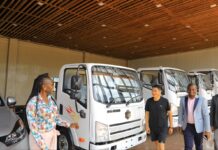 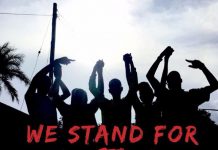