Lubaga South MP, Hon. Kato Lubwama is in deep trouble again after doctors recommended another expensive surgical operation on his colon after the first one he undergone last month.

Kato has been in hospital at Medipal International Hospital in Kololo, since April, where he was admitted “with complex Medical problems” and undergone a successful surgical operation last month.

After a sucessful operation however, Kato Lubwama was advised to stay in hospital as his health condition is closely monitored by experienced medical staff since he had cardiac issues besides the cancerous colon.

The bad news coming in, indicate that doctors have diagnosed another cancerous tumor in the exact spot where the last operation was done. The worst part of it is that Kato is again required to pay a whooping 80 million to have the operation conducted to remove the stubborn tumor.

We reported last time in April, how the operation on the comedian-turned legislator was delayed as he painfully waited for well-wishers to raise the required amount. Thanks to the alarm we made and the generous response it generated; at last, the operation was possible.

Parliament also extended support to Kato and his health condition got better to the extent that he offered an interview with Television reporters handing over the UGX.10 million covid-19 money to authorities in Lubaga Division which had been erroneously allocated to MPs.

And then, Today, the sad news. He urgently needs 80 million for the surgical operation and close to another 60 million accrued in medical treatment over the period he has been in hospital.

Sources close to Kato’s family have intimated that as of now, no single shilling has been extended to this novel cause. The legislator is not certain of when he can raise the money yet doctors say the operation is very urgent.

It has been also intimated that doctors have recommended Kato to seek efficient chemotherapy services oversees immediately after the operation in India or Australia. This is also another hurdle to overcome though it’s still in a distance.

This will not be the first time Kato is reffered abroad for treatment following a delicate heart surgery he underwent in India in 2015.

“It is now on! The fundraising has started” the source said. We wish him the best of luck.

To advertise on this website or send a story for publication please call 0701609906, or send mail to [email protected] 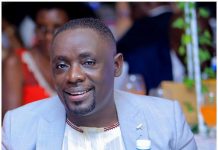