According to UPDF Deputy Spokesperson Lt. Col. Deo Akiiki, an armed group of 7 SSPDF soldiers 6 of them in civilian clothes and 1 in uniform crossed into Uganda about 1.5km at Maru village , Gobolo parish, Kochi Sub-county in Yumbe District.

It is alleged that the soldiers did not cooperate when they were asked to identify themselves and continued to advance prompting UPDF soldiers guarding the border to engage the intruders whose mission were unknown.

In the event, 3 of the intruders were killed instantly and one seriously wounded. The other 3 fled back to South Sudan and 5 guns were recovered from the scene. The injured succumbed to injuries inside Sudan territory.

After a final search, Lt. Col Akiiki said 3 bodies were retrieved and handed over to the South Sudanese authorities on Sunday represented by Col. Kamilo John and other SSPDF officials at Afoji border point in Moyo district.

Joint investigations to ascertain the motive of the intruders has commenced but it is believed they were on a criminal mission in Uganda.

Lt Col Akiiki says border security due to COVID-19 prevention is very high and that locals in areas of Yumbe and Moyo have always complained to the authorities about unknown armed men stealing from them and disappearing into South Sudan through porous borders. 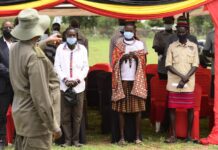 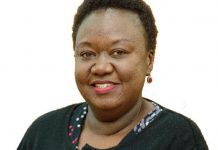 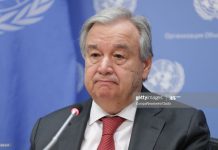