As protests by Makerere University students go into the third day, the situation at the University has worsened after Military Police invaded students’ halls of residence evicting and beating up everyone found inside.

The strike broke out on Tuesday with students protesting the fees policy which enforces a 15 percent tuition increment. The students are also protesting treatment of female students who initiated demonstrations on Tuesday.

Speaking from a hide-out, the Vice President of the students guild University Nalukwago Judith has confirmed that Military police is moving from one room to another evicting students and beating them into pulp. She said the situation at the university is worse as the injury list keeps rising.

She confirmed that Lumunba Hall of residence and neighboring halls have been invaded by the military and scores of students were seriously beaten.

Nalukwago said she didn’t expect the University administration to react in such a manner instead of going into dialogue with student leaders to chat way forward.

Nalukwago said more 60 students who were arrested during the protests have been detained incommunicado at Wandegeya Police Station on orders of the administration of the University.

She said more than 70 students are seeking treatment in different health centers after sustaining serious injuries since protests began on Tuesday.

Military Police has been in running battles with students using teargas and rubber bullets since protests broke out. However, some students had resorted to locking themselves in their halls of residence chanting songs; “fees must fall”

The Vice Chancellor Professor Barnabas Nawangwe today said that hooliganism has no place at Makerere University, but students insist that the new policy should be suspended. 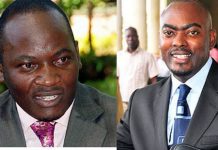 Bankers urge Gov’t to set up a Relief Fund for Private...