Four road projects in Mbale City hang in balance following a stalemate over compensation for the Project Affected Persons (PAPs).

The road projects are beneficiaries of the 20 billion shillings World Bank loan from acquired through Ministry of Lands, Housing and Urban Development under Uganda Support to Municipal Infrastructure Development (USMID) program, to construct 3.5 kilometer roads within the city.

While speaking at the launch of construction works on Monday, the Assistant Town Clerk of Mbale City Mr Kenneth Khatuli said over twenty residents are likely to be affected by the project according the City Engineer.

He insisted that no one will be compensated for property found along the project area because laws that guide urban setting clearly stipulate that all structures must be approved by urban authorities which those affected by the projects didn’t adhere to.

He adds that construction works will soon commence and the project will take thirty months before being accomplished.

Musenze however said that the project may stall in case encroachers in road reserve resist the road works demanding compensation.

Suzan Nambozo and Samuel Gizangi both residents owning structures along North road, vowed that they are not ready to give way for construction without compensation since their structures were constructed 60 years ago before Mbale Municipality and City existed.

Susan and Samuel are not alone. Several other residents who preferred anonymity also share the same sentiments. 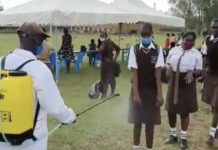