South Sudan has said rebels are responsible for the escalating incidents of killing of Kenyan and Ugandan traders inside their territory.

This follows a string of ambushes by armed men along Yei-Juba and Juba-Nimule roads in which several people have been killed and vehicles burnt.

“We believe that pockets of rebel groups who are opposed to the ongoing implementation of the Revitalized Agreement on the Resolution of the conflict in South Sudan, are behind these unnecessary deadly attacks,” read a statement released on Friday.

The statement notes that the victims include South Sudanese nationals.

Another report named the National Salvation Front (NAS) rebels as perpetrators behind the Thursday attack on a convoy of trucks returning to Uganda on the Juba-Nimule Road. Five people were reportedly burnt to death and three others injured.

The statement from the ministry however notes that South Sudan is always indebted to Uganda and Kenya for their un-waivered demonstration of solidarity with the people of South Sudan.

“In this regard, the Ministry of Foreign Affairs and International Cooperation on behalf of the Government and the people of South Sudan, condemns in the strongest terms possible the killings which targeted innocent traders and civilians who were trying to exercise their right to free movement,” read the statement.

The government of South Sudan has says it is committed to working together with the governments of Kenya and Uganda to address the atrocities being perpetrated by the enemies of peaceful coexistence to enable safe and free movement of peoples, goods and services.

At least 8 Ugandans were killed in an ambush on Wednesday along Yei – Juba road. On Thursday, the Ugandan government condemned the attack but also issued an alert on it’s nationals against travelling to Sudan. Kenyans who conduct business inside Sudan have also been targeted with a number of Kenyan trucks being set ablaze and drivers killed.

The association told its members to withdraw their services from South Sudan immediately until security is assured. 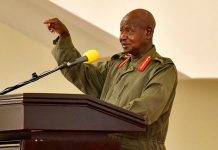 Wakiso: 2 Children perish in a fire outbreak in Temangalo