President Museveni has said he has cleaned up Uganda Revenue Authority (URA) of thieves and he is going to do the same in other entities infested with corruption.

Museveni made the remarks in his post-budget speech he delivered to parliament from State House Entebbe on Thursday.

President Museveni said the national tax body is now free of corrupt individuals following a purge he himself sanctioned in a bid to improve efficiency in domestic revenue collections which he said are still very low in Uganda, compared to other countries.

“There has been a lot of corruption in URA, that one i have cleaned as we shall clean some of other places. Wherever there is corruption, we shall get there like we dispersed the crowd at URA” Museveni said.

There has been massive changes at URA in the recent past which saw the sacking of the Director General Ms Doris Akol and other four commissioners including the commissioner for Domestic Taxes, Mr. Dickson Kateshumbwa.

He said, collusion and greed by government officials is a challenge in government institutions and getting rid of it is his immediate assignment.

For this reason Museveni said his government has allocated 1.45 trillion towards recapitalization of Uganda Development Bank to serve that purpose.

Museveni said more money will be pumped into youth projects to create more job opportunities but also parliament should move process the provisions in the Landlord and Tenant Act which he said has loopholes which are exploited by property owners to evade tax.

He said there is collusion in tax collection systems and wastage in government which once fixed, will help broaden Uganda’s tax base and in turn save the country the hemorrhage the country suffers through payment of huge interest on loans procured from external sources. 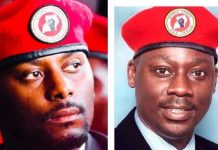