Michael Alinda aka Ziggy Wine, a People Power member and a good friend to the Kyadondo East Member of Parliament Robert Kyagulanyi aka Bobi Wine is dead.

Ziggy Wine was attacked a couple of weeks ago by unknown people who beat him beyond recognition and left him fighting for his life with one eye plucked out.

“Our friend Ziggy Wine could not make it. He passed on last night- succumbing to injuries sustained after a horrendous encounter with kidnap & torture. Very painful! He joins other countless Ugandans. As we mourn him, we resolve to work even harder to end this. Rest well brother” Bobi Wine tweeted this morning.

Earlier on Saturday, Bobi Wine tweed that fellow artiste & #People Power comrade Ziggy Wine was kidnapped only to be found three days back tortured beyond recognition -left eye plucked out, two fingers cut off, belongings taken & left for dead. Pray for him, even as we struggle to end this state of affairs.

Ziggy Wine was later dumped at Mulago Hospital by yet-to-be identified people where he succumbed to injuries this morning.

James Mubiru, one of Ziggy Wine’s close confidants who has been fighting to save Wines life says they are going to engage police to compel the administration of Mulago Hospital to produce CCTV camera footage in order to identify people who dumped Ziggy Wine at the Hospital.

“There is no way the CCTV cameras could have failed to capture the number-plates of a vehicle, or people who dumped Ziggy at Mulago. We cannot rest until we get answers” Mubiru said.

Mubiru also demands that Police track Ziggy’s cell phones and analyse roadside CCTV camera footage and track the assailants right from Nakulabye where the deceased worked up to Nansana where he resides, saying that there could be no way the abductors would have escaped being captured by cameras lined along that road.

Ziggy Wine was kidnapped by unknown people a week ago on his way from work only to be found dumped in Mulago hospital with severe wounds.

In an earlier interview, Kampala Metropolitan Police Spokesperson Patrick Onyango had said they were yet to register a complaint from the musician’s family but that they would investigate to find out who was behind the kidnap.

Mubiru says they are currently at Mulago hospital mortuary to retrieve the body of the deceased who will be taken to his home in Gganda, Nansana for a vigil before the body is taken for burial at his ancestral home in Bushenyi, Western Uganda. 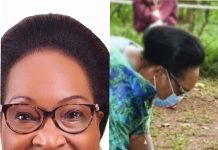