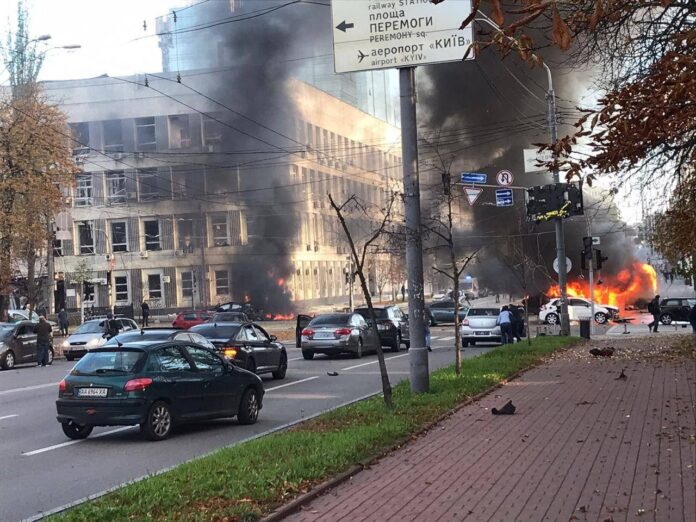 Ukranian capital Kyiv and several other major cities have been hit in a barrage of Russian missile attacks that hit civilian targets and killed several people.

The new wave of attacks on Ukrainian cities also injured at least 64 people as the Russian president talks of ‘harsh response’ to Kerch Bridge attack.

Russian President Vladimir Putin said his country had launched long-range missiles against Ukrainian energy, military and communications infrastructure. He said the barrage of missile fire on Monday was a response to “terrorist attacks” on Russian territory and warned an even harsher “response” could come.

Missiles tore into Kyiv, the most intense strikes on the city since Russia abandoned an attempt to capture it in the early weeks of the war that started in late February. Explosions were also reported in Lviv, Ternopil and Zhytomyr in Ukraine’s west; Dnipro and Kremenchuk in central Ukraine; Zaporizhzhia in the south; and Kharkiv in the east.

Reports quoting Ukraine’s emergency service indicate that the death toll from today’s Russian missile strikes has risen to at least 11.

Ukrainian police had earlier said at least 10 people and 60 people were injured as a result of Russian attacks. In Kyiv, authorities said a missile strike on the capital’s Shevchenkivskyi district left eight people dead.

The number of wounded has risen to 64, Ukraine’s state emergency service said in a Telegram update.

It added that four regions in Ukraine – Lviv, Poltava, Sumy and Ternopil – had no electricity following the attacks and that the electricity supply had been partially disrupted in other parts of the country.