Uganda’s president Yoweri Museveni and chairman of the ruling National Resistance Movement (NRM) has warned politicians who were involved in rigging party elections that they risk ending in prison instead of parliament.

Museveni’s remarks were in his letter published on his person social media account following chaotic NRM primaries which were held last week. The elections which were meant to choose flag-bearers to run for parliamentary seats were marred with violence, bribery and vote rigging.

He said, an audit up to village level will track down cheats in NRM primaries and bring them to book.

“It is shallow criminality to think that you can enter false numbers on a piece of paper known as DR form (Declaration form) and that that will give you the flag. You will end in prison for forgery and subversion instead of Parliament.” Museveni said.

“The villages have not shifted. They are still there. Even if you bribe the agents of the victim candidate to tell lies, the People who voted are there. They will bring out the facts.” he added.

As for the stae minister for labour Mwesigwa Rukutana who was sent on remand for attempting to kill a supporter of his rival, Museveni said Rukutana deserved it because NRM does not tolerate impunity.

“In the case of the Rukutanas, the Police did not give Police bond because, according to the Police, the evidence is clear and they should go for trial. I hope the DPP will also oppose bail. The image of impunity is not acceptable.” Museveni stated.

With the national elections, Museveni said two loopholes existing in the election process including lack of bio-metrics to capture identities of voters, will be covered by the digitally read fingerprinting verification machines and vote-rigging will not be possible. 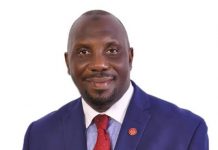 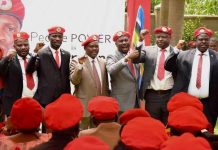 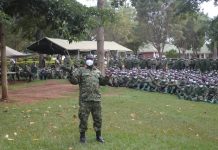