At an open court session sitting in Kampala, 8 justices of the Supreme Court led by Chief Justice Alphonse Owiny Dollo dismissed Kyagulanyi’s petition on grounds that the matters brought challenging the legality of Museveni election were filed out of time. Other justices on the bench are Stella Arach Amoko, Mike Chibita, Paul Mugamba, Ezekiel Muhanguzi, Percy Night Tuhaise, Rubby Opio Aweri, Faith Mwondha and Dr Esther Kisaakye, the most senior on the panel.

Kyagulanyi is seeking to overturn the results of the election which gave the incumbent president Museveni victory while the petitioner (Kyagulanyi) came second. The petition seeks among other things, the annulment of the election and a re-run. The application for amendment filed last week has however faced stiff resistance from the respondents with some challenging the legality amendments.

In the ruling, the justices also noted that the intended grounds Kyagulanyi is applying to introduce are traversed in the main petition and can be argued during the pre-hearing conference due on Thursday.

Medard Lubega Sseggona told the nine-member panel of Supreme Court Justices that the amendment is necessary as it will enable court to carry out effective investigations into all controversial matters in their petition. Court however refused to accept one of the grounds claiming that President Museveni was not eligible to contest in 2021.

Sseggona explained that the amendment is not seeking to bring in any new evidence but to add onto the illegalities that were committed by the Electoral Commission, Museveni and the Attorney General during the just concluded electoral process.

According to Sseggona, after Kyagulanyi’s house arrest, he came across a number of illegalities including voter bribery by Museveni that he wants to bring to the attention of court for investigations.

He argued that his client was illegally placed under house arrest yet he was legally mandated to file his petition within fifteen days after the announcement of the January 14th presidential election results.

Sseggona told the Supreme Court that the ten days his client spent under house arrest consumed most of his time and asked the court to allow him to amend the petition seeking to overturn Museveni’s victory if justice is to prevail because this is the only opportunity the president can be sued.

Museveni’s lawyers led by Ebert Byenkya asked the court to dismiss Kyagulanyi’s application to amend the petition saying the law governing presidential election petitions does not allow for such. He said the law only allows for the filing of the petition, serving the petition within two days, filing answers to the petition within three days, asking for particulars if any and final hearing.

He emphasized that there is no allowance for amendment of the presidential petition as each step has a fixed schedule. Byenkya also said the role of the Justices is not to investigate the matters as claimed by Kyagulanyi’s lawyers but to deliver judgment and asked them not to take the court on a fishing voyage.

In the amended petition, Kyagulanyi contends that as an incumbent, Museveni was ineligible to take part in the January 14, presidential election. Kyagulanyi states Museveni was not qualified for election as president while in the office of the Head of State, Head of Government, Commander in Chief and chairperson of the National Security Council.

Kyagulanyi’s amended petition adds that because Museveni was the incumbent, he abused the presidency by commanding or directing forces under his command, control and authority such as the Special Forces Command (SFC), Uganda People’s Defence Forces, Uganda Police Force, the Internal Security Organisation, Resident District Commissioners, Local Defence Unit and Special Police Constables, to brutalize, torture, maim and assault him, his agents and supporters. He adds that the forces also interfered with the electoral process to his benefit.

Kyagulanyi also alleges that Museveni, in the exercise of his powers as commander in chief, reshuffled forces during election period, with personnel ‘notorious for brutality and partisanship’ such as his son Lt. Gen. Muhoozi Kainerugaba (appointed as commander of SFC) and Maj. Gen. Paul Lokech (appointed as the deputy IGP) who then, according to him, perpetrated electoral violence and brutality against Kyagulanyi, other candidates and their respective agents and supporters.

Kyagulanyi also alleges that Museveni used his powers as the president to use government resources for the purpose of campaigning when he caused the disbursement of resources, during the election period, to the ‘EMYOGA’ poverty eradication initiative solely to influence and win the support of the beneficiaries.

“Cumulatively, the above acts…created insecurity and seriously compromised freedom, fairness and voter turnout in the 2021 presidential elections particularly in the petitioner’s stronghold districts/cities of Kampala, Wakiso, Mukono, Mpigi, Gulu, Masaka, among others where the electorate was greatly intimidated, terrified and horrified thereby affecting the percentage of voter turnout…,” Kyagulanyi’s petition reads in part.

The petition further lists a number of cases where Museveni allegedly bribed off his supporters to change their allegiance through giving them money, cars, and other inducements include Ashburg Kato, Ronald Mayinja, Bosmic Otim, Jenniffer Nakangubi commonly known as Full Figure, Abbey Sewakiryanga who is also known as Basajjamivule, and Andrew Mukasa Bajjo, among others. 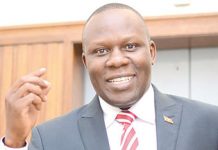